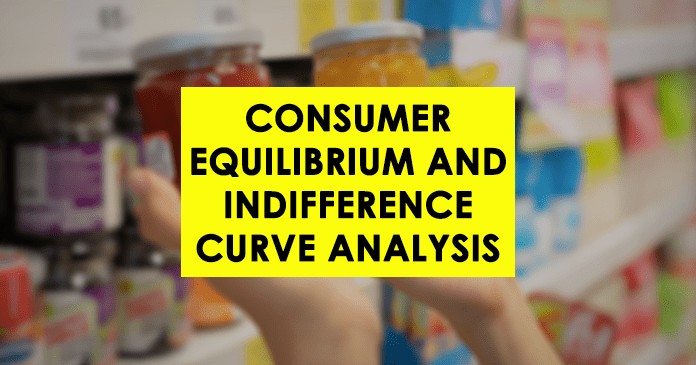 After reading this article, you will learn about:

The consumer wants so many goods. Although a consumer needs various quantities of different commodities to consume at a time, consumers cannot buy all commodities. His income is not enough to buy all the goods. This means that income acts as a constraint in maximizing utility.

The budget line can define as,

The locus of all combinations of two (or more) commodities, can be purchased with given money income and commodity prices.

Suppose there are two commodities (X and Y).

We can present this income constraint graphically by the budget line. Let’s see

With the given income (M) and commodity prices, we may find Qy’s corresponding values by assigning successive values for Qx.

By inserting these points in a two-dimensional plane, we may construct the budget line as above.

When the budget line touches the indifference curve, that point gives the highest utility.

The touchpoint is the consumer equilibrium point.

The above equation proves that the slope of the budget line is the ratio of the two commodities’ prices.

The slope of the budget line = Price ratio

Derivation of the Consumer Equilibrium

In analyzing consumer equilibrium, we assume that.

Thus, the first-order condition or necessary condition for the equilibrium. This says that the last unit of money spent on each commodity must bring him the same marginal utility. It also called ”The principle of Equi-marginal utility.”

But fulfilling this condition is not sufficient because it does not ensure the equilibrium always. The second-order or sufficient condition is that at the tangency point indifference curve must be convex towards the origin.

Consumer equilibrium is a constrained maximization problem. It can write formally as,

In analyzing the consumer equilibrium, we assumed that,

On the other hand, when prices of commodities change, keeping income constant, a position, as well as slope of the budget line, will change.

The analysis of the effect of change of all these factors on consumer equilibrium is very complicated. Thus, for simplicity, firstly, we will examine the impact of the change of consumer income on the equilibrium. In this case, prices of the commodities and consumer, preferences remain constant.

When income change keeping other factors constant, the budget line will shift upward or downward.

For example
when the income of the consumer increases, the budget line shifts upward, implying increasing the purchasing power. The shift of budget line would parallel since we keep the prices of the commodities constant. The new equilibrium point will place on a higher indifference curve. Consumers will get a higher level of satisfaction.

Budget lines have shifted upward as a result of the rise of income. The new equilibrium has occurred at the points in which those shifted lines touch the indifference curves giving him higher satisfaction. The line or curve formed by joining these equilibrium points is called ‘income consumption curve – ICC.’

how consumer equilibrium has changed when his income rises.
ICC may be a straight line or a curve depending on the consumer’s preference for the goods.

The shape of ICC depends on the nature of goods. Theoretically,

ICC angled towards one of the axes, the commodity represented by the axis is considered as a ‘luxury.’

ICC positively slope without leaning any axis; both commodities are ‘normal.’

ICC positively slope up to a specific range of income increase and then negatively sloped, the commodity represents the axis which ICC deviated away is an ‘inferior’ good.

Engle curve shows the relationship between consumer’s income and the quantity consumed, prices being constant.

This name for the curve gives as an honour to the Prussian economist Ernest Engle (1821-1946), who first studied the household income-consumption relationship.

We can derive EC from the ICC. Let’s see.

1. What are the conditions of consumer equilibrium in indifference curve analysis?

2. What is Consumer Equilibrium explain with diagram?

3. What do you mean by consumer equilibrium?

4. What is Consumer equilibrium with example?

5. What is the Engel curve in economics?

6. What is an Engel curve? How is the Engel curve derived from the income consumption curve?

7. Explain the consumer equilibrium position in the framework of indifference curve analysis. Derive the necessary and sufficient conditions graphically or mathematically.

Let me know by leaving a comment below and ask questions.