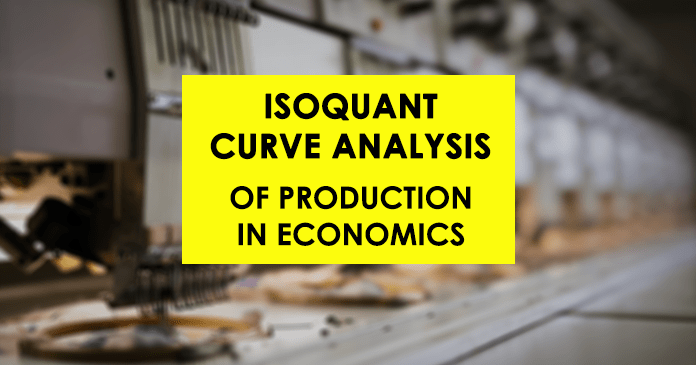 In this article, we will discuss the Isoquant curve analysis. After reading this article you will learn about:

What is an Isoquant curve?

The isoquant curve is the main tool to explain the behavior of producers. It shows the different combinations of inputs with which gives different levels of output. By using an ”isoquant approach” we can analyze the behavior of the producers in the long-run production. In this analysis, we assume that

The isoquant curve can present as an algebraic equation or as a schedule or as a graph.

In a two dimensional plane that shows two inputs, say L and K, we can mark various input combinations, which gives a different level of output.

Among these various input combinations, we can identify some particular combinations which yield the same level of output. The set of these points of inputs generates the isoquant curve graphically as shown in Figure 1.

Thus, Isoquant curve can define as the locus of all possible combinations of inputs that yield a specific level of output.

The map which includes a set of isoquant curves is called ‘isoquant map.’ In such a map, isoquants further away from the original show a higher level of output.

Isoquant Curve Analysis: What is the slope of an Isoquant?

What is Marginal Rate of Technical Substitution (MRTS)

MRTS is the ratio between the quantities of one input that a producer can be given up for other input in order to maintain output at the same level.

MRTSL,K is defined as the number of units of input K that gives up in exchange for an extra unit of L. So that the producer maintains the same level of output.

Isoquant Curve Analysis: What are the Properties of the isoquant

2. Isoquant of a rational producer is convex towards the origin. Also, it shows decreasing MRTS as one factor is substituted for the other.

In principle, there may be different shapes of Isoquant curves depending on the substitutability among factors. Few of such alternative shapes are given below:

3. Two isoquant cannot intersect each other.

The positive range of the isoquant in the right-hand in which MPL is negative. The left-hand side suggests that the MPK is negative.

Ridgelines can define as the locus of points of isoquants where the marginal products of the factors are zero. Production techniques are efficient only within the ridge lines. It is called the ‘economic zone of production.’ The rational producer takes his production decisions only within this range.

This segment is identical to the second stage of short-run production.

What is Consumer equilibrium under the isoquant framework

In the analysis of the equilibrium of a rational producer under the isoquant framework,

Although the producer is willing to attain the highest level of output represent by the highest isoquant in the isoquant map, he cannot do so because his outlay is insufficient. This means that his attempt of maximizing profit is constrained by the cost of production determined by the outlay and factor prices. Thus, producer equilibrium can be considered as a constrained profit maximization problem.

The iso-cost line is the locus of all combinations of factors the producer can purchase with a given outlay.

The slope of the iso-cost line is equal to the ratio of factor prices. (w/r)

The producer would be able to determine the optimum input combination under two approaches.

The producer’s aim is to decide the optimum factor combination. So that maximize the output for the given cost constraint. In this case, assume that outlay and factor prices are given.

The producer’s aim is to decide the optimum factor combination. So that minimizes the cost of production for the given level of output. In this case, assume that the level of output and factor prices are given.

In this we assume that the isoquant map and the cost constraint are given. And also the producer knows the cost of production but not precisely the output level.

In this case, producers attempt to minimize the cost of production for the given level of output. In other words for the known quantity of output producer must determine the possible lowest cost factor combination.

The equilibrium point is the point that an iso-cost line tangent to the iso-quant which represents the given level of output.

The producer is in equilibrium at point e that isocost line A-B tangent to the isoquant which gives q1 output level.

The equilibrium can change when factor prices or money outlay change. These changes affect the cost constraint. Assume that total outlay available increases keeping factor prices constant. In such a situation isocost line shifts upward parallelly and the equilibrium is determined at the points where it touches a higher isoquant.

The shift of the isocost line continues further with increases in money outlay. Thus producer’s equilibrium will be higher on higher isoquants. The line or curve we get by joining these equilibrium points passing through the origin called ‘expansion path’.

Expansion path can interpret as ‘the locus of all equilibrium points when expenditure on inputs increases keeping input prices constant.’

Returns to Scale in Isoquant Framework

There are three types of returns to scale in the long-run production. Returns to scale can be illustrated clearly with the use of the isoquant map. This can be done in two ways:

1. The behavior of the output level when both inputs are increased by the same proportion.

2. Considering the input required to increase the output by the same proportion.

2. what is isoquant curve and its properties?

3. What is the slope of an Isoquant?

4. What are ridge lines in economics?

5. What is an Isoquant and Isocost?

6. What is the Expansion path

7. Derive the equilibrium condition of a rational producer under the isoquant framework using r graph.

Conclusion All right then. In this article, we discussed Isoquant curve analysis. Behavior of the producer in long-run production can analyze by using the isoquant approach. To further understand this topic follow the below topics.

Types of Isoquants in Production